Sri lanka is an island which is situated in the northern eastern side of the Indian ocean. The Polk straight separates Sri lanka from India. Bay of Bengal is situated to the west of Sri lanka whereas India is situated to the east of Sri lanka. Colombo is considered to be the biggest city in the coastal line.it is also the commercial city in Sri lanka. The land area is about 65610sqkms.The longest distance from north to east is 44km.The right half of the country is narrow and it is 220km in length. The coastal line spreads to 1300km.Srilanka is a country with different temperature levels and climatic changes. Furthermore the coastal area spreading around the country and the natural forests enhance the bio diversity of the country. The most remarkable fact is that the tourists who visit Sri lanka will get the opportunity to witness all these things within a short time period. 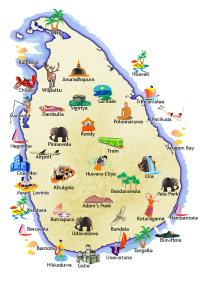 Sri lanka was colonized 125,000 years before the birth of Jesus Christ. Sri lanka inherits a recorded history as well as a rich culture. According to the legends some Indians settled in the dry zone of Sri lanka in the 6th century bc. These settlements were transformed to a kingdom later. The introduction of Buddhism to Sri lanka in the 3rd century BC marks the most important historical event in Sri lanka.The Sri lankan history and the culture is shaped with the utmost influence of Buddhism. Anuradhapura and polonnaruwa periods mark the most important historical and cultural events in Sri lanka. During the 13th century a complex irrigation system was established for agricultural purposes. Moreover Buddhist establishments such as dagabas were built in this period.

In the beginning of the 16th century Sri lanka was influenced by the westerners for the 1st time. Westerners were attracted to Sri lanka as a result of the abundance of cinnamon and the geographical location of the country. The coastal areas were under the domination of Portuguese. Until the Dutch invaded Sri lanka in 1658.in 1796 Sri lanka was invaded by the British people. However the upcountry remained independent. Until 1815 Sri lanka was introduced by the name “Ceylon” by British. In 1948 Sri lanka obtained the independence and became a member of the common wealth organization. In 1955 Sri lanka received the membership of the united nations organization. Once they come to Sri lanka the tourists will get the opportunity to visit natural waterfalls,rivers,forests as well as 8 places in Sri lanka Which are named as world heritages. In addition they will be able to taste the unique Sri lankan food items and to enjoy the cultural values in Sri lanka.